The greatest performance diets may seem complicated and fancy, but they are all built on a foundation of basic principles and simple foods. Eat the right ones, and your body will respond accordingly. If your current regimen doesn’t include the following body-builders, beeline to the grocery store and stock up on them, stat. Bonus: They’re also all pretty delicious.

Show us a bodybuilder without egg whites in his diet, and we’ll show you someone who’s missing out on the best protein money can buy. Paired with oatmeal, an egg-white omelet can turn your breakfast into a power meal to fuel the rest of your day.

Buy It: When purchasing eggs, do the basics: Always check the date and open the carton to check for cracks. Also, be sure the eggs are refrigerated in the store and when you get home with them. Although eggs stored out of the refrigerator won’t necessarily cause illness, they do lose a grade per day when not refrigerated.

Prepare It: Although many gadgets promise an easy way to separate the yolk from the white, the quickest, easiest method is to simply use your own clean hands. For this six-egg-white omelet recipe, crack six eggs into a medium-sized bowl. Next, using clean fingers, lightly grasp the yolks, lift them out one by one, and discard. With a fork or whisk, whisk the egg whites with salt, pepper and any of your favorite herbs until well combined and a few bubbles have formed on top. Spray a medium nonstick skillet with cooking spray. Place it over medium-high heat and add egg whites. After about 15 seconds, reduce heat to medium. Pull in on the edges of the omelet with a spatula and slightly tilt the pan so the uncooked egg runs under the cooked portion. Continue this around the perimeter until most of the uncooked egg disappears. Then fold the omelet in thirds, as if you’re folding a letter to fit it into a business envelope. Using the spatula, carefully slide it from the pan to a plate and eat it immediately.

Chicken breast may be the quintessential bodybuilding staple, but lean cuts of red meat are loaded with complete protein and pack the most punch when you’re trying to pack more beef on your frame.

Buy It: Always purchase London broil that’s bright-red in color. If it has even the lightest tint of brown to it, it has started to spoil. Try to find a steak or roast that’s at least 1 inch thick with as little visible fat as possible.

Prepare It: Preheat a grill to the highest heat setting. Remove all visible fat and cut the steak or roast into 4-6-ounce individual steaks. Season both sides of meat with salt, pepper and/or a spice rub or marinade. Place on grill and cook 3-6 minutes per side or until cooked to your liking.

Salmon has the prerequisite protein as well as the added benefits of unsaturated (good) fats. Hardcore lifters are often deficient in fats, because they’re so often on super-low-fat diets. Including certain fish in your daily intake is one way to get the fats back — at least the healthy kind.

Buy It: Atlantic salmon is the variety most commonly found in American grocery stores, and is generally the most affordable. When fresh, it’s bright orange in color and doesn’t feel slimy or exude an odor. Always choose a thicker cut — because the tail gets more of a workout when the fish is in the water, the meat near the tail is tougher.

Prepare It: Be sure all bones are removed from the fillet (a “fillet” by definition is boneless, but sometimes a few stray bones don’t get removed). Preheat oven to 400 degrees F. Place the 4-6-ounce fillet on a baking sheet or pan, seasoned as desired. (To practically eliminate cleanup, line the pan with aluminum foil before adding the salmon, so you can throw the foil out after it cools.) Bake 10-14 minutes or until pink in the center, and the fish flakes with a fork.

Why did the chicken cross the road? To get away from the hordes of bodybuilders chasing after it. Dumb joke, but it’s no understatement to say that the majority of gym rats consume chicken breast on a regular basis. And why not? High in protein and ultra-low in fat, the bird’s unoffending taste makes it palatable for most everyone.

Buy It: Save money by buying boneless, skinless chicken breasts in bulk in the freezer section. Be sure raw chicken is pinkish in color (not white-toned, which would indicate freezer burn or improper refrigeration). Defrost overnight in the refrigerator. The defrosted chicken shouldn’t feel or smell slimy.

Prepare It: Preheat a grill to the highest heat setting. Trim all visible fat from the breast, and season or marinate it with your favorite spices or sauce. Place chicken on the hot grill (it should sizzle), then turn the heat to the lowest setting. Cook for 4-6 minutes, then flip and cook 4-6 minutes more, until no longer pink inside or a thermometer stuck into the thickest portion of the breast reads 170 degrees F.

A buff body isn’t built by protein alone. Carbohydrates provide energy you need to work hard and play hard. Sweet potatoes provide that oomph without overdosing your system with simple, fast-acting carbs. They’re often used precontest by bodybuilders looking to fill out depleted muscles, but even if you’re not getting ready for the stage, they’re an excellent part of any dieting or mass-gaining strategy.

Buy It: Sweet potatoes come in two varieties: the white kind are like regular baking potatoes; the dark ones have a dark skin and orange flesh and are packed with nutrients. When choosing a sweet potato, make sure it has a smooth, firm skin with no bruises or blemishes. Stick with smaller or medium-sized sweet potatoes, which tend to taste better than jumbo ones.

Prepare It: Preheat oven to 350 degrees F. Scrub the potato under cold water using a veggie brush, making sure to remove all dirt. Pat it dry, then prick it 5-6 times all over with a fork. Place directly on a lower oven rack and bake about one hour (for an 8-12-ounce potato), or until it’s soft when pierced with a fork.

Pork is often shunned by diet purists, and what a shame. Not only is it more flavorful than chicken, but some cuts are almost as low in fat while still boasting the requisite protein power. Pork tenderloin is the filet mignon of pork — it’s the most tender, as well as the leanest portion, of the meat.

Buy It: Pork tenderloin is generally found prepacked in a plastic wrapper in the meat section of the grocery store and is usually dated. Be sure that the meat isn’t expiring within a couple of days. Look for a tenderloin that feels firm, lacks a lot of visible fat and gristle, and has a tinge of pink to it. If it appears dry or even a little gray, don’t purchase it.

Prepare It: Trim all visible fat using a sharp knife. Marinate the pork in your favorite marinade for one hour to overnight in the refrigerator, or coat it with your favorite spice rub. Preheat oven to 300 degrees F. Meanwhile, spray a skillet with nonstick spray and place over high heat. Brown the meat, about one minute per side, until just browned, then transfer to a baking dish and place in oven until a meat thermometer reads 155 degrees F and the meat is only slightly pink inside, approximately 15-25 minutes. Slice and serve hot. 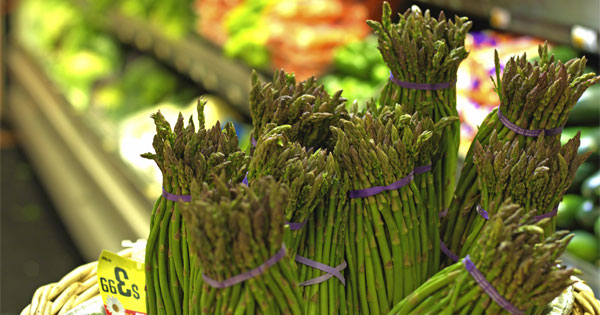 Asparagus? Seriously, if you want to grow, your mom was right — you need veggies. When it comes to greens, you have plenty of great choices. Broccoli and spinach are other highly recommended options, but we picked asparagus for its water-leaching quality. Top bodybuilders turn to asparagus as a meal when it comes down to precontest crunch time and they need to get extra-tight for the stage.

Buy It: Whether the spears are thin or thick, they should have a bright-green color and be free of blemishes and bruises. The buds at the tip should be closed tightly, not wilting. For best taste, consume within three days of purchase.

Prepare It: Trim the base of each stalk. If you’ve chosen thick stalks with tough skin, it’s best to peel the base end with a vegetable peeler. Lay a spear flat, then, starting about halfway between the tip and base, peel to the end of the base. Rotate the spear and continue to peel the lower half until all sides are peeled and the base is about the same thickness as the tip. Select a pan wide enough to lay the spears flat, add 1 inch of water and a pinch of salt, and place over high heat until water boils. Add asparagus so that the tips all face the same end. Boil 3-4 minutes for thin spears (4-6 minutes for thicker ones), or until spears are just crisp and tender. Remove and serve hot.

For the original article visit FlexOnline

9 Exercises for a Beautiful Bottom