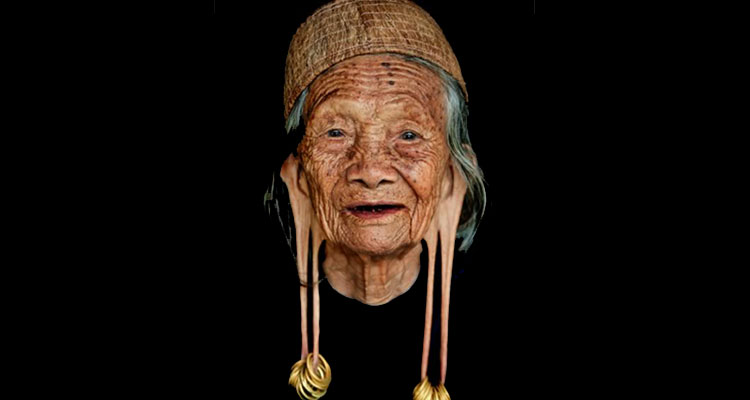 It is impossible to say who the first people were with stretched ears, or why they did it. Today, many cultures (including our own!) practice the art of ear stretching for many different reasons. Religion, coming of age ceremonies, warding off evil, sexual enhancement and physical beauty are common motivations. However, that just barely scratches the surface as there are many other reasons, as well. People all over the world still practice ear stretching. From the Masai tribes in Kenya to the Huaorani tribe in the Amazon Basin, stretched ears are still a common sight. It is a fascinating testament of human culture that a Western youth can walk into a piercing shop to select stretched ear jewelry while a Hmong youth in Thailand selects from an array of silver tubes. (Source | Photo) 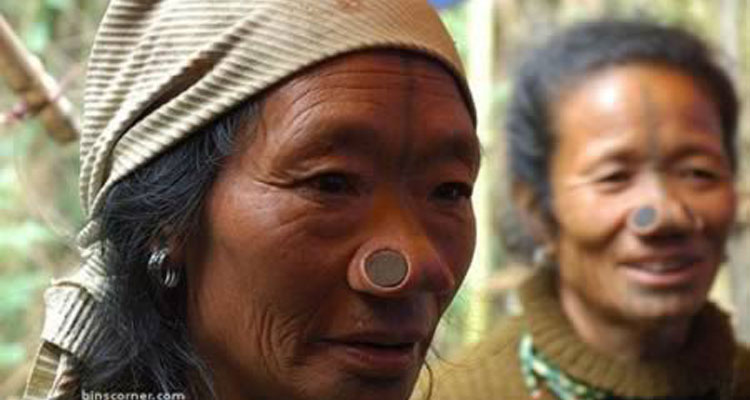 The Apatani tribe lives in the Ziro valley in the state of Arunachal Pradesh in India’s northeast. Apanti women were considered the most beautiful among the Arunachal tribes; so beautiful, in fact, that they had to make themselves look unattractive as protection from invaders from other tribes. Hence, Apanti women wore large wooden plugs in their noses, a tradition not carried forward by the younger members of the 26,000 people-strong tribe today. (Source) 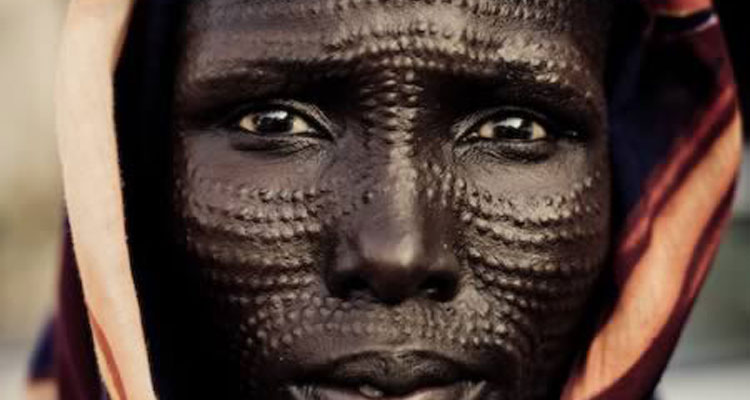 Most Dinka boys and girls don’t cry when the local sorcerer takes a red-hot knife to their dark faces. If they wince or cry or react to the pain they will lose face in the community, so it’s best to sit through the process in peace. Facial scarification is practiced throughout Sudan, and various marks across the faces of tribesmen give identity to the tribe and beauty to its women.

Men of the Dinka tribe in South Sudan scar their faces with three parallel lines across the forehead in a rugged display of courage to the tribe. Dinka boys receive their scars around adolescence to mark the transition to manhood, when they take the responsibilities of the other men in the nomadic tribe. (Source) 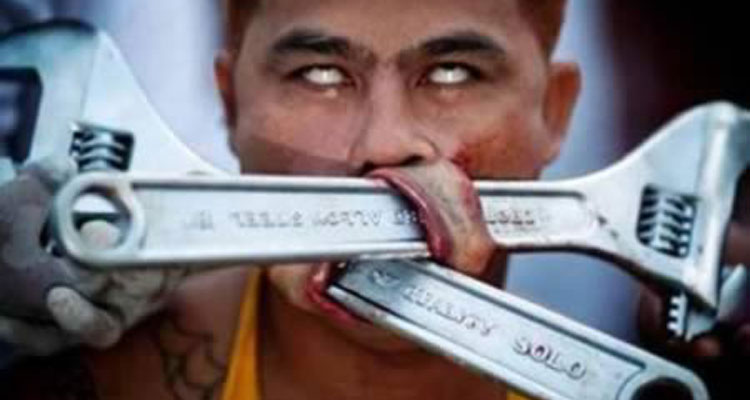 For some people, this would be totally extreme, but for local Thais, this is completely normal. They ignore the pain because this ritual is a rite of passage to adulthood. This is an annual ritual performed in public to announce to the whole world that they have become adults.

The vegetarian festival in Phuket sees a great deal of devotional activities in the Chinese communities. Trance and heavy piercing are part of the tradition. This festival is held on the Southern Thai island of Phuket every year in October. Most impressive are the processions that are held almost every morning during the ten days of the festival. The processions feature devotees of the different city shrines which act as “mediums” for the Chinese Gods. Some of the mediums put sharp objects (mostly metal objects) through their cheeks as an act of devotion for themselves and for the whole community. Other rituals that are performed include walking barefoot over hot coals and ascending ladders with bladed rungs.

All the mediums act involuntarily while in a trance, which allows them to endure the long piercing sessions. Although the wounds are said to be healed completely after the service, scars accumulate on their faces year after year. (Source) 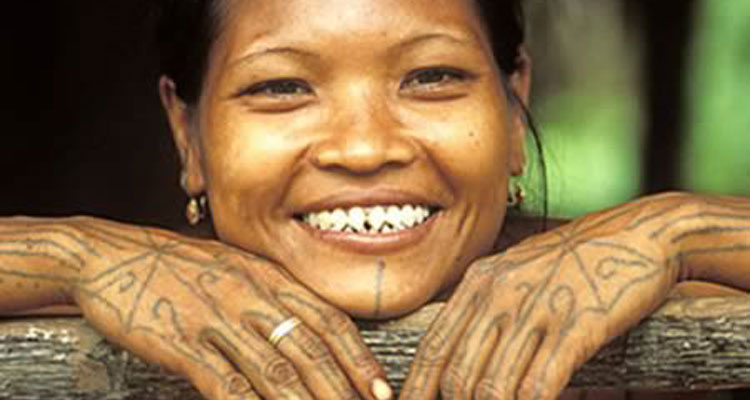 Human tooth sharpening is the practice of manually sharpening the teeth, usually the front incisors. Historically, many cultures have practiced this form of body modification. In Bali, teeth were filed down because it was thought that the teeth represented anger, jealousy, and other similarly negative emotions. The teeth were also sharpened as a rite of passage for adolescents. Teeth filing was also used by Aborigines for spiritual reasons, similar to assorted Vietnamese and Sudanese tribes. In Mayan culture, the teeth were sharpened, and sometimes had designs carved into them, to distinguish those in the upper-classes. Many cultures would sharpen their teeth to imitate animals, such as the Wapare of inter-tropical Africa, who sharpened their teeth to imitate sharks, as well as kicking out some mandibular teeth during puberty. (Source) 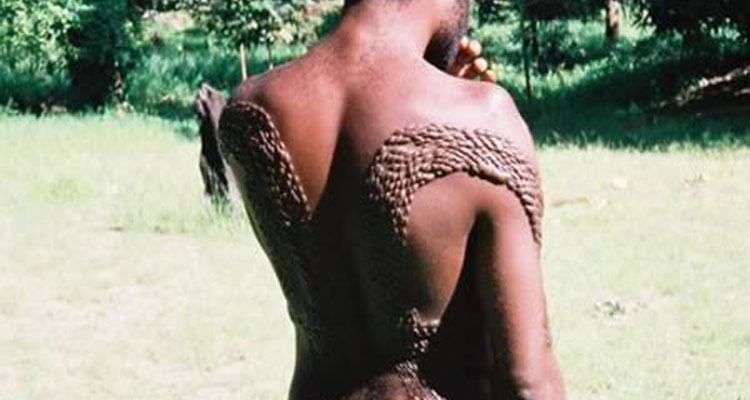 Though scarification is done by people all over the world, it is practiced heavily by Sepik River tribes in Papua, New Guinea as part of an initiation ceremony for men. This is only a small part of a ceremony that lasts for weeks and includes public humiliation, but it’s ridiculously painful. The elders of the tribe use razor blades to cut the young men all over their bodies in a pattern that closely imitates the rough skin of an alligator. They believe that the alligator will then consume any semblance of a boy left in their bodies, and they will become men. (Via) 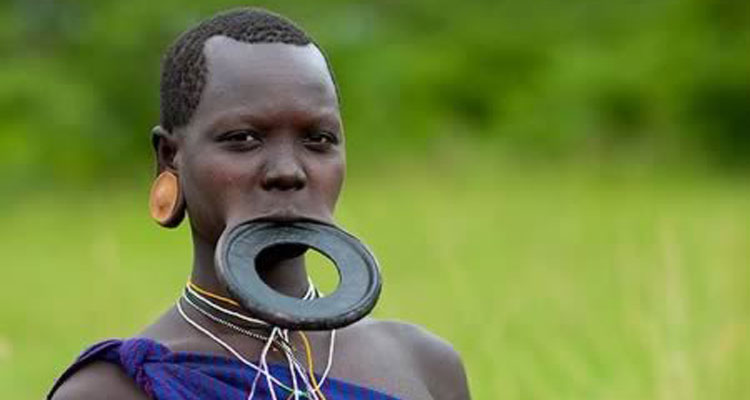 The lip plate, also known as a lip plug or lip disc, is a form of body modification. Increasingly larger discs (usually circular, made from clay or wood) are inserted into a pierced hole in either the upper or lower lip, or both, thereby stretching it. Archaeological evidence indicates that labrets have been independently invented no fewer than six times, in Sudan and Ethiopia (8700 BC), Mesoamerica (1500 BC), and Coastal Ecuador (500 BC). Today, the custom is maintained by a few groups in Africa and Amazonia.

In Africa, a lower lip plate is usually combined with the excision of the two lower front teeth, and sometimes all four. Among the Sara people and Lobi a plate is also inserted into the upper lip. Other tribes, such as the Makonde, used to wear a plate in the upper lip only. In many older sources it is reported that the plate’s size is a sign of social or economical importance in some tribes. However, because of natural mechanical attributes of human skin, it seems that the plate’s size often just depends on the stage of stretching the lip and the wishes of the wearer. (Source) 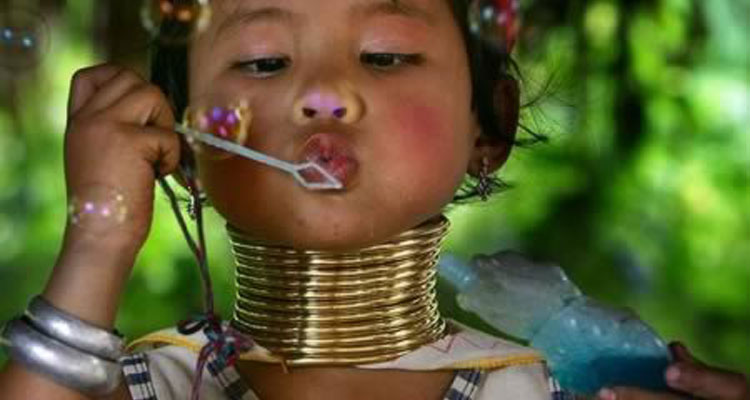 The Kayan women of Northern Thailand are known for the exquisite and incredible brass coils they wear around their necks. They are often called the “long necks” or the “giraffe women” by outsiders and can wear up to 25 coils, which many never take off.

Myth has it that the women will break their necks or be unable to support them if the coils are removed but this is simply not true. Maeneng, above, is the matriarch of her village, and while she is the only one to wear 25 coils, she often helps adjust and repair the coils of other women.

Children are often given their first set of coils at age 5. This consists of a set weighing about 4 1/2 pounds, then new rings are slowly added. In actuality, the Kayan women do not have their necks elongated; instead, it works in the other direction. As the weight of the coils press down, the clavicle is lowered, and with each addition to the neck rings it falls further, compressing the rib cage as well. The shoulders finally fall away to give the appearance of an elongated neck. (Source| Photo)

Please visit Oddee for the original article along with other information.

The Secret To Healthy Goal Setting

5 Fitness Apps That Really Get Results!

ABC’s of Carb Cycling: What Everyone Needs to Know

Omg! The Best Strange Fruits Ever!

Fit People Eat this! You Should Too

Is Having a Beard Actually Good For You?