Ladies, have you noticed changes in strength right before, on, and around your menstrual cycle compared to the rest of the month?  For women, and men who train women, its important to understand the hormonal changes that will have an impact on training. 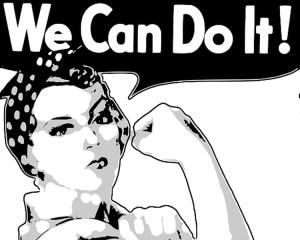 What Does This Mean?

Ladies, you have a glaring additional variable in your training compared to men – your hormones fluctuate markedly, whereas ours do not. These fluctuations are much larger in women who don’t take birth control pills compared to women who do.

Start paying attention to your strength levels throughout the month. Do this for a period of around 6 months to get an accurate handle on whether or not your strength waxes and wanes. If it doesn’t, then don’t concern yourself with this phenomenon.

However, if it does, and you find that you’re consistently setting PRs during certain phases of your menstrual cycle compared to others, then you should “periodize” your training according to your periods. Don’t try to set a PR when your strength is weakest. Instead, try to peak and go for PRs when your strength is greatest (perhaps right before or after your period starts, but it certainly depends on the individual). And don’t be alarmed if and when your strength dips during other portions of your cycle.

15 Unbelievable Wedding Traditions In The World!

What is Urine Good for? And Maggots?

Are You a Good Digester? 10 New Tips