The world is full of new ways to change up the basics of workout routines. Take running for example. You start off as an average runner at best with your new running shoes and shiny new gadgets. From there you start buying better shoes and making sure you mark your success with the newest running app and heart monitor. With time and consistency you notice your success.

Why would you ever think about adding beer to the equation? Earlier this year two-time NCAA National Champion in the 5-K did just that. This combination is best known as the beer mile. See how he blows the record out of the books!

With the upcoming inaugural world championships, this sudsy race has officially become a thing.

It is April 27th, and James Nielsen assumes his starting position on the track at the College of Marin in Northern California. His wife, Mimi, is filming him with a Flip video camera. She raises her iPhone to the camera, and focuses on the phone’s timer. “On your mark, get set…” On “Go!” she starts the timer, and Nielsen springs into action. He cracks open a room-temperature Budweiser–because warm beer retains less carbonation than cold–tilts his head back 45 degrees–an angle he knows through studying fluid dynamics will best usher the brew down his gullet–and seals his lips onto the can. It takes him five seconds to drain the can, three seconds faster than if its contents had been simply poured onto the ground. Then–this is very important–Nielsen starts running and tosses the can in the trash. 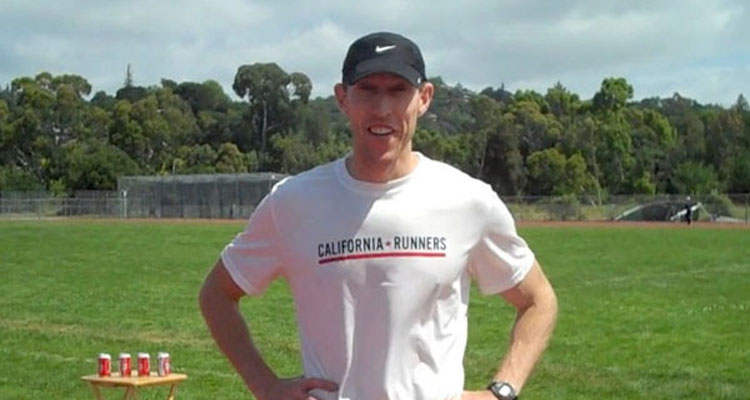 The two-time NCAA National Champion in the 5-K runs his first lap very fast. He’s dedicated the past year to training and can now run a mile on an empty stomach in 4:10. With a belly full of beer, he figures he can run 4:20, maybe 4:25.

In the first 400 meters, he feels the triple whammy of carbonation, sloshing liquid, and a furious pace. As he reaches the wooden tray holding the remaining three cans, Mimi yells his split: 70 seconds! He grabs beer number two, jogs forward in the 10-meter drink/run transition zone, and sucks down the liquid in one big inhale. He turns the can upside down over his head to prove it’s empty, then tosses it. He completes lap two in 76 seconds. By now, his abdomen is screaming with a double-sided cramp. He downs another beer–crack, tip, chug–before lap three, which he clocks in 79 seconds, and another before his fourth. On this last lap, Nielsen is schlepping a quart and a half of liquid and a cloud of carbonation in his stomach, an “absolutely terrible” sensation that would derail most humans, but Nielsen has also dedicated the past year to stomach-expansion practice. For tips, he tapped pros like Joey Chestnut, who’s ranked first in the world in competitive eating, having eaten 69 hot dogs in 10 minutes. Nielsen has done things like drink a gallon of milk before running hard around the block and speed-eat a watermelon in one sitting.

After 72 seconds, Nielsen crosses the finish line and Mimi calls out his time: 4:57! In disbelief, she holds the timer before the camera. Her husband has just become the first runner in the world to break the five-minute beer mile. (The previous record was 5:02, set by an Australian named Josh Harris in 2012.)

The breathless runner crumples, hands on his thighs, breathing heavily. Does he want to say anything? Shaking his head, Nielsen says, “That is really painful.”

The next day, Nielsen posts the video on YouTube, and within days it gets more than a million views and a steady stream of online comments: “This guy can chug beers like an animal.” And: “Great job, Beast!!” Nielsen ran and drank with such ease.

Check out more details on beer mile at runnersworld.com or www.beermile.com

A New Record Set In The World Of Beer Mile Runners

Fit People Eat this! You Should Too